Saved from a Kitten Factory 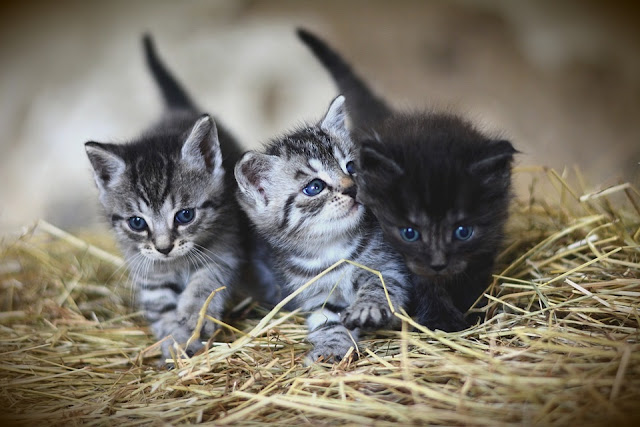 I've rescued two cats, but my youngest came from a worse environment. Her name is Moo moo, and she is an almost all black tortoiseshell. We wanted to get another cat, so our other one wouldn't be lonely. We saw an ad in the paper entitled "It's Easter Time," advertising kittens that were for sale during Easter. The address to the house was in a bad part of town, so right away we knew the situation couldn't be too good.

We drove to the address and were greeted by an overweight man with stains covering his white T-shirt. After he took us into the tiny two bedroom house, we saw how bad it was. It smelled strongly of urine and there were about 40-50 small kittens underneath a filthy bed. Some were so young they still had their eyes closed.

As we started chatting with him, we found out that he was selling kittens that were as young as three weeks old so he could go gambling. He told us that he had sold some to the local residents of the neighborhood and the kittens had died from starvation.

His reasoning for it was that the kitten had gotten lonely and died (he told us over the phone to buy two so this wouldn't happen... note that he charged $10 per kitten). We knew of course that this was a lie, and that the kittens were not ready for solid food.

He said that the cat buyers would come back to get a second kitten after the first one had died. As I started going through all the kittens to
pick one out, I saw that many of them had eye infections (from the dirty, dusty floor) and respiratory problems.

I even saw one kitten that had its belly bloated out that was squirming on the floor with its eyes closed. Even when I touched and picked up the kitten it didn't respond... some of these kittens were already dying.

My choices were limited because the kitten I chose had to be a female, like the one we had at home, so I picked out an all black kitten with bright blue eyes. She was way underweight with her ribs visible. Her tale also appeared to be broken, about two inches of the tip hanging down.

Right after we paid for her, we took her to the nearest Petco because we knew that she had to be bottle fed. When we got there the manager came out to look at her. She said that the kitten had just gotten her eyes open and appeared to be starving.

We ended up taking a bottle and kitten formula out of the package and feeding her in the store. She said that we should call animal control on the person we bought the kitten from because he was neglecting them. We called animal control, but they turned the case over to the police.

We took Moo moo to the vet the next morning so she could get her first vaccinations and get treated for her eye and lung problems. We received eye medication and what I'm assuming was a antibiotics for her

Even as she approaches her second birthday, she still has a lung problem. Her eyes cleared up and now they're an emerald green color. She also gained weight quickly, and is now even over-weight. There's no doubt that if another week had gone by, she'd have been dead.
Amber Puthuff