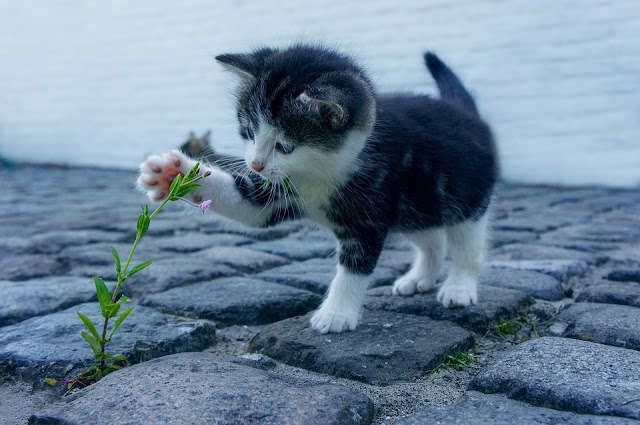 My story began in May of 2004, when I promised my husband, Dan, that I would not get another cat, since I had 15 that lived in my parents' barns (I have been a cat lover since I was a child). Well, two days later, which was the Tuesday after Mother's Day, one of the neighbors called and asked me if I would take in an abandoned kitten approximately between two and three weeks old.


Her pest exterminator had found the kitten at his last stop. I said, "YES."
In a few minutes, a strange man was on my front porch holding a five-gallon bucket asking, "Are you Mrs. Golden?"

I confirmed I was, and he reached into this five-gallon bucket and handed me a kitten, slate grey with white on his front feet, and white on down from the ankles to the toes on his back feet.
He fit snuggly in the palm of my right hand. After the man left, I carried him to our Chihuahua's scales and he weighed five ounces. A newborn kitten weighs 3 1/2 ounces at birth. Then I called Dan at work and asked him to bring home a baby bottle and kitten formula when he got off from work.

When he got home, he looked at him and asked what I had named him, but I had not named him as of that time. Dan named him "Tap Shoes" and we call him "Shoes" for short. He does not realize he is a cat. He only comes when we call "Shoes."

When Shoes was two years old, it was his turn to save me. I am a diabetic and my blood sugar is supposed to be between 90 and 130. Well, one morning after Dan went to work, Shoes got up in bed with me and tried to get me out of bed. I told him, "Mama does not feel good," but with the Lord's insistence he wouldn't leave me alone.


I got up and got dressed and checked my blood sugar and it was 60. That is 30 points TOO LOW. I quickly got something to eat. He has never done that again, but my blood sugar has never been that low again. I love him and he loves me.
Sharon Golden
Cats