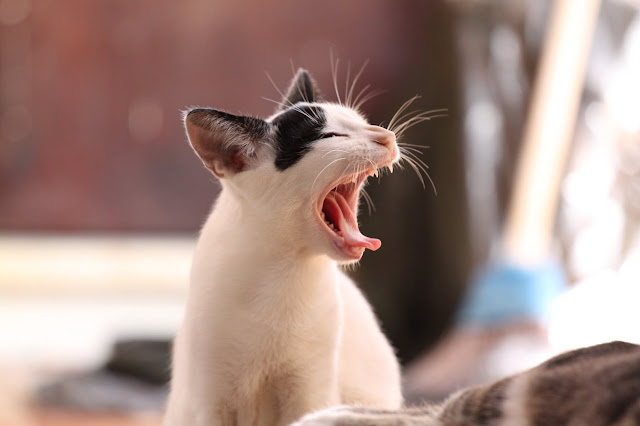 Right now we have two rescues and three adopted from shelters. The first rescue is Tinker. We were having our family's New Year's Eve bonfire in the back yard of my brother-in-law's house. We were sitting around the fire having a good time – the next thing we knew, we could hear a faint meow in the distance, which kept getting louder.

All of a sudden she appeared over a small hill coming from the next yard over – she was obviously a young (about six month old) stray. She had ear mites and some blood in one of her ears, so everyone jumped to action, and my sister-in-law took her inside and gave her a warm bath (it was quite cold outside). Tinker loved it and all the attention she was getting!

My mother-in-law took her into the vet and made sure she was healthy and had her fixed. She got her shots and treated her mites, but they already had too many cats at her home. Plus, my wife and I just bought a house and were going to be ready to bring my wife's kitty, Kitty back to live with her, and now us from her Mom's.

So, we were lucky enough to be able to get our beautiful fluffy kitty Tinker to live with us also. They were best friends by the time they came to live here, and were able to comfort each other until they got used to living at our home and with us.

I want to mention Kitty. He was a wonderful 20 pound cat who came to trust me, and he became a lap cat. He never was before. It took a while to accomplish, but through my love for him he grew to trust me completely. It was the same with Tinker. I could kiss

them on the head, hold them tight (but not crowd them or trap them). As soon as they wanted I would let go – it's a great feeling to have such trust, and all our cats that we have now do also.

Kitty was already seven years old when we got him and he passed away four years ago already, and I still am getting emotional talking about that. I miss him so! So that's the first rescue story of my adult life.
David Trepanier
Cats