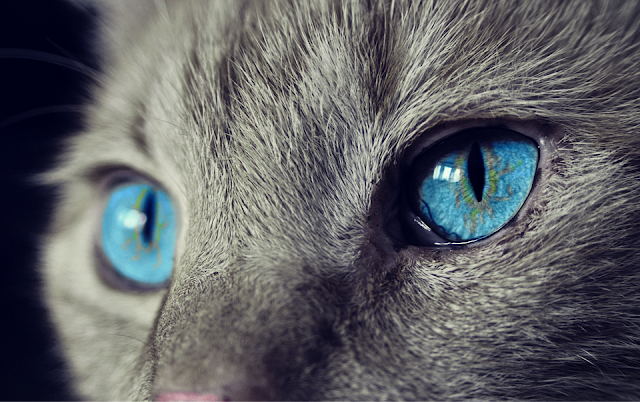 My wife and I walk five miles a day, and last year while we were walking, we saw a cat in a field. We started feeding her and lead her to a barn nearby. We fed her for six months. We would sometimes only see her once or twice a week, but we still put food out for her.

We noticed the food hadn't been touched for a month or more, and we hadn't seen her either. We stopped leaving food for her but still looked for her when we walked. Six months went by and we never saw her.

Early spring came and my wife said that she couldn't have survived the winter. On a rainy spring day while on our walk, we saw a vehicle almost come to a complete stop as this white cat ran across the road.

My wife said, "Could that be the same cat we saw six months ago?"
We started leaving food again at the barn and noticed that something was eating it, but we never saw the cat until two months later. She was in bad shape and had hardly any hair on her body. She would not allow us to get close to her.

Over the next six weeks she would meet us at the barn every day to be fed. It took a lot of work and patience to earn her trust, but we noticed she wasn't gaining any weight. It looked like she wasn't going to make it... she was starved.

When we were walking, she would cry and try to lure us into the weeds, so my wife said she must have kittens. We followed her, but she got lost in the woods so we couldn’t follow her any more.
Two weeks later, we heard her crying and we walked over to her and saw she had four baby kittens. They were about six or eight weeks old. We found out she was keeping her kittens at a different barn.
She was so poor and skinny from feeding the kittens that she could hardly walk. We called the vet and found out we could bring her in to
have her spayed. The next day, we took her back to her kittens. We started feeding her and the kittens three times a day.

After feeding her for a month three times a day, her hair had grown back and she had gained weight. We decided to find a home for the kittens and we would keep her. We brought them home and in a month we found good, loving homes for the kittens.

And that white calico cat that survived over a year? She’s now named Callie. She is very loving and a big part of our family with two cats and two dogs.
Ron Rossok