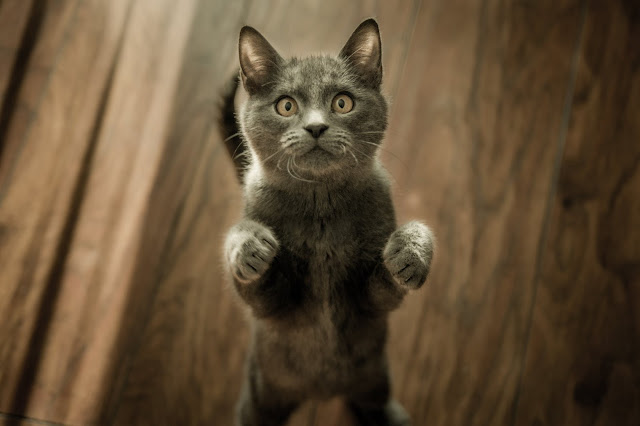 I have two kitties, Romeo and Coco. They are a part of our family and they are nine months old. They represent happiness and hope to our family, because they came during a harsh time when my mom was experiencing depression. We didn't rescue them, but we

adopted them via an organization here in Costa Rica, called Rescate Animal.


Carolina, the person who rescued them, found them when they were three months old in a vacant lot, crying and famished. In fact, Carolina told us that if she didn't find them that specific day, they would have died. Romeo was the one in charge of collecting food for the two of them, as he is the brave and decided one. Coco, on the other hand, was the weaker and more fearful, and that's why Romeo protected him.


After they were found, Carolina took them to the house of a relative called Anabelle, because Carolina's job keeps her very busy and she couldn't take care of the kitties while a family was found to adopt them. Anabelle posted a picture of Romeo and Coco on the organization's Facebook page.


I updated my status on Facebook saying we were searching for a cat, and a Facebook friend shared with me the link of the picture of Romeo and Coco. I clicked the link but because it is a well known organization, I thought somebody had already adopted them.


Despite my thought, I told my mom about two kitties who were siblings and were posted for adoption. She sent an e-mail to the
organization but she specified she only wanted one. Days passed, and Rescate Animal (the organization) replied to my mom. They sent her Anabelle's contact information so my mom could talk to her and consider the adoption.


Rescate Animal organizes adoption fairs, where people go to see the animals up for adoption. There are dogs, cats, hamsters, etc. Anabelle told my mom about the fair where Romeo and Coco would be, so my mom could meet them.


That day, I couldn't go to the fair with my mom, but my mom said the two of them seemed to like her so much that the people from Rescate Animal wanted my mom to be the one to adopt them. My mom, without our consent, adopted the two kitties when she said she only wanted one, because she knew they were siblings and the simple thought of separating them broke her heart.


Finally, the kitties arrived at my house. They were so little and skinny. In the first weeks, we gave them food constantly to treat their malnutrition. At first, they distrusted us but now they love us a lot. I think since the day my kitties came home, there's a before and an after in my family, starting with the fact that I didn't like cats before!
Carolina Jiménez
Cats