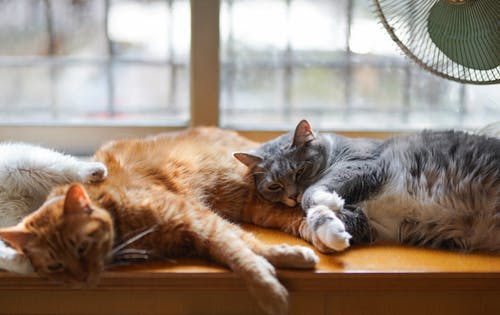 My kids found a little brownish ball of fur that was maybe two to three weeks old. I took her in because her mama was nowhere to be found. We bottle fed her. I would set my alarm for every four hours at night to bottle feed her. Her name was Mocha Chocolatte, and she passed away at eight months old in my arms on the way to the vet... I don't know what she died from but I think I know why she died.
You see, my husband will only allow me to have three cats. Mocha was a very unique kitty. I would hold her facing me and talk to her, and if I had to gently fuss at her for any reason while holding her, she would put her little paws on my mouth as if to say, "Shush mommy... you know you don't mean it." When I held her facing me and just talked to her she would put her little paws on my cheeks and just leave them there.
When she died, people told me they felt like she had a great small life and loved it, and that she wouldn't have survived as long as she did had I not taken her in. Now, I told you about Mocha because I think it was time for her to go because she knew another little kitten was coming along that needed my help more than she did.
Her name is Precious Oreo. When we found her she was a shy, timid little thing who was very scared to be loved on. She was probably about three to six months old when we found her.
Her previous owner (I assume she was owned) had chosen to force her to be still while he died her beautiful white and black fur blue, head to tail, chin to tail. When I picked her up she allowed me to cradle her in my arms for about an hour. She looked kind of scared as if to say, "Please don't hurt me."
After an hour she started getting fussy so I took her home, closed her away from my other kitties and gave her food and water. At first we named her Precious Bluebell due to the blue on her. Once it wore off we renamed her middle name to Oreo. About a week into having her with us, I noticed her little belly felt like it had little elbows through it, so I assumed she was pregnant, until I noticed the telltale signs of being in heat.
I felt around on her little belly a bit more and decided she had very hard stool in her bowels. I know you're not supposed to do this, but it worked. I gave her a little bowl of milk because I know it will give kitty a means to go potty. It worked and she was no longer constipated.
I have had Precious for a little over two years now and at times she'll still shy away from a touch, or she flinches. She LOVES to sit and have conversations with me, though. She tells me what she wants by pointing her little head in a direction.
For instance, if I ask her what she wants... if she wants her treats she will look up on my desk. If she wants to play, she will look down on the ground by my desk where she knows I keep her string that I use to play with her.
Her little legs are very short, even her tail is shorter then a normal cat's tail. I figure she either has dwarfism or was very malnourished as an itty bitty kitten. Precious is a very happy kitty now, but still isn't sure about being petted sometimes... but when she wants lovies, she always lets us know.
Priscilla Crow