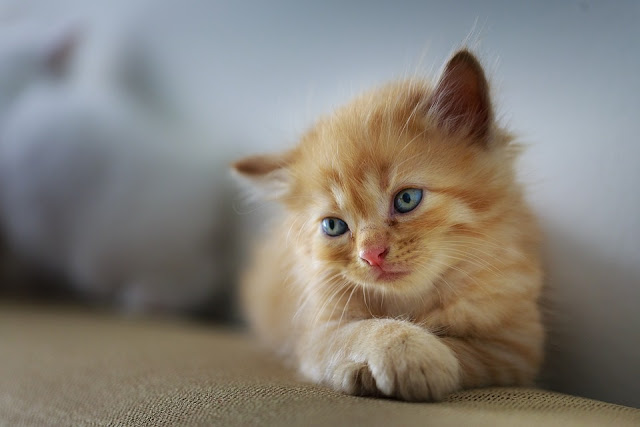 My boy's name is Milo (pronounced phonetically: mi-lo – not to be confused with the American pronunciation), and he was about seven months old when I brought him home.

When I first got him, he was the kind of cat that was so fearful of humans, he would rather hide-away and starve to death than come out and face anyone. Only when I was asleep would he come out to play like a typical kitten, which is normal, since cats are generally nocturnal, anyway.

You know how cats shed terribly when they're stressed or frightened? The poor boy would shed everywhere, and if I carried him, I'd put him down to find a distinct line of cat hair trailing down my shirt.

His rescuers found him in a trailer park, with two of his siblings that I know of and his mother, who was so horribly abused that she still had the pellets of a BB gun in her flesh from, I'm assuming, the children who used her as target practice.

His siblings have both been adopted into forever homes, the female of which was my original adoption choice before learning she was already home. I believe their mother, on the other hand, was euthanized for lack of any other choice. It still breaks my heart to think of what she must have had to endure while trying to protect her litter.

Now Milo's about a year and a half old, and still greatly dislikes it when humans approach him. He's learned quite quickly that the doorbell means strangers, to which his reaction is to run and hide under my desk chair. He now knows the sound of my footsteps by heart, so when I move he knows to follow.

When I come home from work he'll know to greet me. He's vocal with me now, with the most precious meow. It's irresistible! He's gotten into the habit of making me follow him away from the family if they're around so I can pamper him in private.

It took a long time of surprising him with kisses and hugs and patience over time to get him comfortable enough to move around, and now he can't wait to run around the house in the morning! His rescuers told me he was a one-cat-only-home kind of personality, but I didn't have much of a choice when my brother came home with his cat for good.

Milo used to hide in the most impossible spots when around other cats in his foster home, but he and his lady are now inseparable. It's both the most adorable thing in the world and incredibly frustrating at the same time, because he likes to share and she doesn't! That is to say, she likes to think she owns his food, water, litter box, toys, and even my bed. Silly girl. But as long as he's happy, so am I.
Aimee Abdelrahman