On May 4, 2013 I got up early, as usual, and went for a power walk around 6:30 am. It was Saturday, and I was looking forward to attending the Farmer John's protest in Irvine, a little later that day. As I was getting close to reaching my two miles I thought, "I have time to do another block," so I headed towards Washington Place. I don't usually like to power walk along big, busy streets as I prefer the more quiet streets of
L.A., but this morning I was just trying to increase my mileage goal for the day. 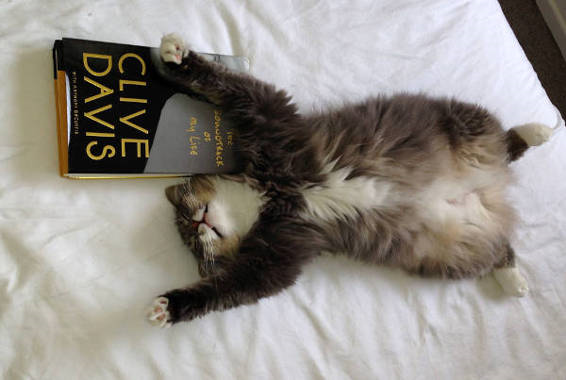 I turned onto Washington Place and was maybe 50 feet in, when I passed a small gated house. There, in front of the house, inside the gate was a cute, fuzzy cat. I knelt down and she immediate came over to the gate where I was able to pet her. She was purring and extremely loving. I looked around and saw that there was spaghetti and other human food strewn out on the porch. I assumed it was for her.

As she came closer, I noticed that her tail was completely messed up. I couldn't tell if someone had taped up her tail or what was going on with it. She reeked of infection. The more I was able to examine her tail, the more it became apparent that she was injured. It looked like she was missing the majority of her tail and what was left of it (about four to five inches), was literally rotting off from infection. It was obvious that this was not a recent injury, but more like a month old injury.

She looked so sweet and I simply could not understand how she could be purring like that and showing so much love. She did not seem bothered by her injured tail at all. Amazing! So here I was at 6:30 in the morning. You don't go knocking on people's doors at that time in my neighborhood. You never know who might open the door (just saying).

So I thought, okay, I will have to come back later and try to inquire about this cat. I went to the protest and when I came back home I cruised by the house several times. The cat was nowhere in sight. I cruised by that house every day, morning and night for several days, but never saw her again... until about three days later.
I was on my way home from work and thought, let me just cruise by again and see if she's there. I did not have big hopes at that time, since by then I must have cruised by 30 times without seeing her. I turned my car onto the busy street, cruised by the house and there she was, sitting in the same spot! I damn near crashed my car as I tried to park, and felt a rush, thinking, "Okay here she is. Let's do this." Whatever "do this" meant. I had not planned this out at all.
I opened the gate and headed for the front door. I knocked three times... no response. I knocked again, three times. Still no response.
"Darn it," I thought. I tried again, much harder this time. Still no response. I turned around and looked for the cat. The poor thing. She was semi-long haired, gray/brownish with white. So pretty.
Her hair was all messed up. She had a huge ball of matted hair on each side of her face. I can only imagine how fluffy and gorgeous her tail used to be. As I knelt down, I heard the front door open. I turned around and was met by an older, Hispanic woman.

I asked her, "Is this your cat?"
She said, "Noooooo. It's not my cat."
I asked, "Do you know if she belongs to anyone around here?"
She said, "No, she's a stray. She comes and begs for food every night and then when she's done, she crawls up under the roof to sleep."
I asked her how long she'd been coming around and the lady told me about two months. I asked about her tail and the lady informed me that the cat had been like that since she started coming around. My heart literally sank. Two months with an injury like that? My God! Poor baby.
The lady noticed me petting and talking to the cat and brought out some hand sanitizer. "She smells, use some of this."
I said, "Thank you, but it's okay," fully knowing that if my hands smelled like hand sanitizer, the cat would likely not allow me to touch her again. I said to the lady, "Listen, I have got to help this cat. She's clearly injured and must be in great pain. I have to get her to a vet."
"Yes," the woman said, "But I don't want her back here."
I said, "That's fine. Give me about half an hour and I'll be back. I will need to go grab my crate and pick up some supplies for her. Do you think she will still be here when I return?"
The lady replied, "Yes, she usually hangs around until 10 or 11 pm."

I jumped in my car and drove to the pet store and picked up litter, a litter box and food. I drove home and picked up the crate and was back to get the cat about 20 minutes later. She was still there, in front of the house. She was not excited to go in the crate, but I got her in there. The lady was happy to get rid of her and started wanting my number as she thought I should now meet her son. She said her son would like me. She also came running out with a big book on cats that she thought I should have. It was a sweet gesture, but really, I had no time for that and just wanted to get the cat home.

I got home and decided to keep the cat in the bathroom. I called my vet and informed her of what had happened and that I would need to bring her in first thing in the morning. I also asked if they would be able to amputate her tail that same day in the same facility if that was necessary. She said yes.

The cat was sooo sweet. She immediately jumped up on the bathroom counter and every time I would pet her she would start wagging her stub of a tail in excitement. I felt so bad because every time she wagged her tail she would slam it against the popcorn wall and the infection would be oozing out of the tail. She didn't seem to care. She never stopped purring. It was absolutely insane. I did not want to start trying to clean her tail as I had no idea of what I was dealing with. She seemed more