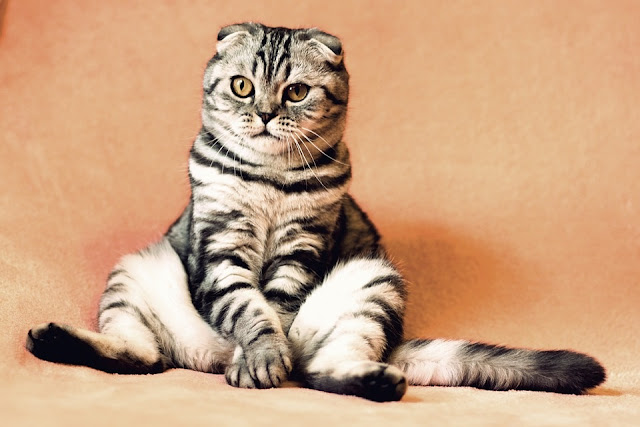 I work with OPKIT Kitty Sponsorship Program (OPKIT) in Florida, with Jamie Robinson. There was a part-Himilayan cat, Hanuko, at the Devore Shelter in San Bernardino, California. It's a high kill shelter, and Hanuko was on his last few minutes of life. He had been labeled "friendly," but was manhandled by one of the Animal Control Officers, bit him, and was immediately signed off to be euthanized.

OPKIT's Jamie was desperate to save Hanuko, and put out an urgent plea on OPKIT's Facebook page. I saw this plea, and rushed over to the Devore Shelter to rescue him (with the help of Kitty Devore Rescue). Poor Hanuko was emaciated. He was covered in fleas, had massive injuries and sores all over his body, and had matted fur. His condition made me cry!

I brought Hanuko home and put him in the bathroom with food, water, a potty box, toys and a warm bed. I left him alone to give him time to settle in, but checked on him before I went to sleep. My other cats sniffed around the door, but left him alone. After several days (and a few nasty bites), I took Hanuko to the vet for his shots, neutering, flea treatment, grooming (to get the mats out of his fur), and leukemia testing. The intention was to get him ready for travel (fly) – to Jamie in Florida.

I picked him up from the vet (who now had his hand wrapped in gauze... Hanuko bit him also – YIKES!) and brought him home. I spent a lot of time stroking him and talking softly to him, telling him that he was safe and loved. I fell completely in love with this boy, and Jamie agreed to let me keep him. Now I tell Hanuko that he is SO VERY SPECIAL that he has two Mommies!

Hanuko is a complete love bug! He follows me all around the house and loves his brother Taco and sissy Maddie. They run around and play

all day long. He gives me kisses, and is an absolutely gorgeous, fluffy boy! He loves to sleep on his back, with his legs spread wide open and loves kisses and belly rubs! What a changed baby! I adore Hanu!
Susan Onuma

Editor's note: At the time of this writing, OPKIT Kitty Sponsorship Program, Inc. has saved over 1,100 cats, and are on their way to building their own cat sanctuary. You can read more about OPKIT at their page on Cat Lovers Only.
Cats