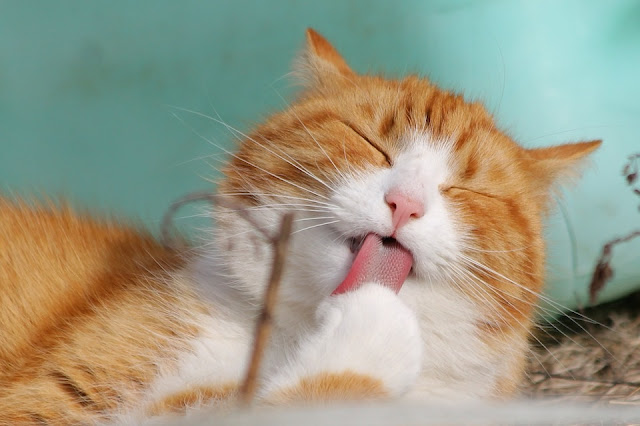 In 2012, I decided it was finally time for me to get another cat. It was a decision that didn't come easily. I had lost my last two boys to inoperable tumors in their noses.

I had looked in the newspaper for several months, but nothing. I happened to take a neighbor's dog to the vet for them one day and the vet told me about a woman, only a few miles away from me, who had a cat that needed a new forever home.

I called her a few days later to ask if I could come by. We met the following day, and she told me that she really wasn't in a hurry to let go

of her cat, after all. I thanked her for her time and went home empty handed.
One warm afternoon I decided to take a drive and came across a sign that stated, "WE HAVE KITTENS." I turned into the parking lot and went inside. It turns out it was a "cats only" adoption place. I thought to myself, "I'll be able to get one here, for sure!"

I went through and looked at all the cats. The woman working there offered to let them out of their cages so I could tell what their personalities were like. After sitting on the floor for 2 1/2 hours watching cats playing, I filled out my application and said I really wasn't sure. I needed to think about it. I was really looking for that special connection with one cat and just didn't find that there.

I went home, feeling sort of defeated. Then my friend called and said she wanted to go to our local feed and supply store. I thought, "Why not?"
We went in and right away saw two grown cats in a huge cage. There was a sign that said they were for sale, but they had to go together. That wasn't possible for me. I could only have one. I inquired at the counter if there were any more I could see and the woman replied, "We've got one around that door over there."

As she pointed to a door farther down from where I was standing, I started walking towards it. Just around the door, I came to a standstill. There, in a cage the size of a large tote, was the most beautiful little cat that I had ever seen! It took me all of 15 seconds to bond with this cat! I yelled out, "This is my cat. Please don't let anyone else take her!"

I was informed that she had been left at the shelter that same morning... no name, no address, no information, nothing. I informed the woman I was speaking with just how much I loved this cat already! She happened to be the Animal Control Officer for our town.

She told me I would have to wait a week before I could bring her home because she needed a vet check up and had to be spayed. I mentioned that I already had a vet and we agreed that I could pick her up in less than a week if I got her to my vet for spaying within two weeks. I agreed and we shook hands.

Today, about one year later, I am still the happiest forever Mom to Calli. She is my shadow, my snuggle-bug and a wonder companion. Every morning we have our "talk," (she is very vocal) and I swear that she understands a lot of what I say! She's such a sweet girl and loves to lie on people, reaching up with her paws, like she's trying to give you a hug around the neck! My new best friend, Calli!
Bonnie Hurlburt