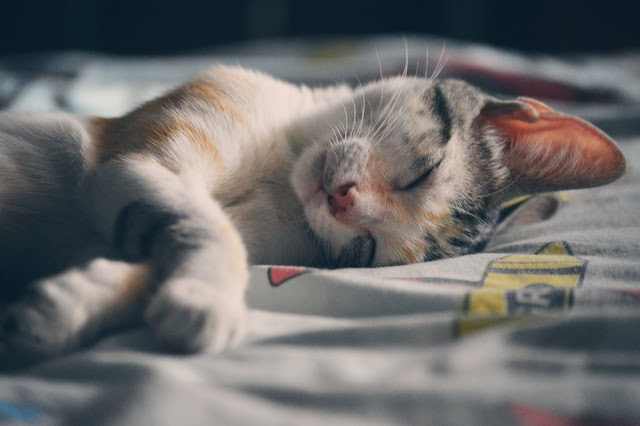 I was "drafted" to do Trap-Neuter-Return (TNR) in my parents' backyard after a slew of feral cats showed up. Their house was behind a Petco store and someone, I believe, was throwing out open cat food which attracted the strays. I quickly learned how to do TNR and rented the traps from the local humane society, as I knew the only other alternative for these homeless cats would be euthanasia.

I TNR'd about 15 cats with the idea that I would continue to feed and care for them in my parents' backyard. This took about a

year to do successfully. I recall that I TNR'd a very frightened grey female in the beginning of my trapping, and towards the end I TNR'd a large orange male.

At some point after their trapping, these two somehow found each other and became inseparable, and it was at that time that we learned that the male, whom we named O'Brien, was deaf. How he managed to live outdoors in an alleyway frequented by delivery trucks is unknown. The grey kitty (who we named Chinsey due the white spot on her chin), however, seemed to understand his predicament and became his ears.

He would look at her whenever anything happened to see how she would respond and then he would respond in kind. If she approached a human that she knew was friendly, then he would do so as well. He, in turn, protected her from other cats as she was not a fighter and would run off frightened if another cat became aggressive towards her.

These two now rule the backyard and are very much a loving couple and have been so for five years now. They have also tamed down and enjoy their daily belly rubs. They have taught me that feral and/or homeless cats will bond with each other and face their

world together. They head-butt each other endlessly and are so devoted to each other. It is very sweet to watch.

They continue to live outdoors as my apartment is already full of rescue cats, but O'Brien in particular appears to prefer to live outdoors as he does seem to think that the block that my parents' house sits on is his "kingdom" and that Chinsey is his "queen."