A Dog in a Cat Suit 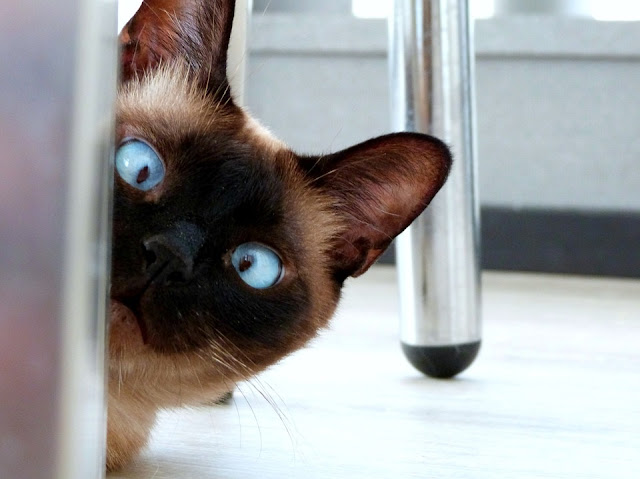 My Desiree was rescued from my front yard in May, 2009 when she was about five weeks old.

I originally had no intention of keeping her when she first showed up (at what turned out to be about three weeks of age), because I already had a nine year old Devon Rex. I didn't think she'd accept the kitten.

Initially, I was feeding this kitten and trying to get it to trust me enough so that I could catch her and bring her to my vet's office, thinking that they would find a home for her. But a week after her arrival, when I finally did catch her and brought her to them, I was told they already had too many and could not take her.
I brought her back to my yard and started contacting numerous cat rescue groups. Each and every one turned me down, even though I offered to make a $100 donation to them if they would take her. I was going on an overnight trip, so the day I left, I put out a big bowl of dry food and water for her and was kind of hoping she would run off to someone else's house by the time I got back as I really didn't know what to do anymore.

Well, I came home and not only was she still there, but she was now lying at the top of my doorway with runny eyes and an open sore on her neck. When I caught her, I had felt a lump in the same area and I believe it was an abscess that had now opened up. So off to the vet's office we went and after a two night stay and $400 bill, she came home with me.

At the time, she was contagious with an upper respiratory infection, so I had to keep her separated from my other cat for the first several weeks. I also had to give her medicine three times a day for the infection and some other ailments. When I finally did introduce the two of them

there was some hissing on the part of my older cat Lily, but thankfully they did wind up being best buddies, snuggling and wrestling with each other often.
I lost my dear Lily two years later, just after her 11th birthday, and I thank God every day for blessing me with Desiree. As hard as it was to lose Lily, having Desiree here to love and be loved by has helped me enormously. She is the most loving cat I've ever met... kisses me all the time and follows me all over the house. I often say she's a dog in a cat suit, because she acts more dog-like than cat.

The funny thing is, all my life I had always wanted a tiger striped tabby like she is, and had planned on adopting one from a shelter after my Lily was gone. Apparently, God wanted one in my life sooner and I couldn't be happier about it!
Lynne Torgersen